Sometimes we are very discouraged that we are physically disabled. But we should learn from those people who were successful despite being handicapped. Here are some “failure to success” stories of disabled people. Learn from these inspirational stories of success.

Once an 8-year-old child was badly burned in a school fire. His legs were badly burned. Doctors said he would never walk. The whole flesh of his feet was burnt. When he came home from the hospital, his mother would massage his feet daily and take him to a nearby ground to move on a hill chair. There was a lot of conviction in that child, his determination power was very much appreciated. He believed that no matter what happens, he will run. 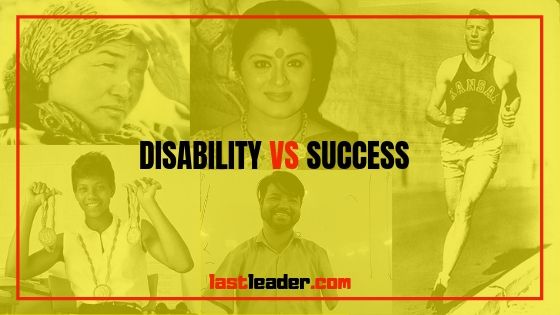 One day he became the fastest runner in America to run a mile. She set a world record in the 1500 m race. He was none other than Dr. Glenn Cunningham. It is a tribute to Cunningham’s resolve.

‘Himalayan victory’ at the age of sixty-eight

This climber has measured the height of mountains in Nepal, China, Japan. Chandraprabha is still in a hurry to not hoist the flag on Mount Everest. She told that she was selected for Everest’s mission thrice but she could not complete them.

She was born into a poor family. When she was just four years old, she had severe pneumonia and fever, which led to polio. The doctor put her in a ‘brace’ on the leg and said that now she would never be able to walk with her feet. Wilma’s mother always encouraged her to use her God-given ability and work courageously. W. Rudolph was a very courageous girl. To give up as if she did not know. At the age of nine, contrary to the advice of doctors, he removed the dress from his foot and started walking slowly on his feet.

At the age of 15, she went to Tennessee State University. There she met a coach named Temple, she told the coach that I want to be the fastest runner in the world. The coach, seeing his dedication, loyalty, and determination, said that “no one can stop you and I will help you in this, I will train you.”

The day also came, which W. Rudolph was eagerly waiting for. She was participating in the 1960 Olympic Games. She was confronted by a runner named Jutta Heine, who had never lost. The first race was 100 m. Wilma defeated Jutta and won his first gold medal.

In the second race of 200 m, Wilma also defeated Jutta and won her second gold medal. The third race was the 400 m Beton Relay Race. Here she was also competing against Jutta Heine. In this race, the fastest runner is placed in the end. When Beton was given to her after three runners running here, the baton fell from her hand, but as soon as Wilma saw Jutta running, she immediately picked up the baton and ran like a machine at incredible speed. In this way, he also won the third gold medal.

It was a historical event. She made history, she realized the dream of becoming the world’s fastest running woman.

She made a history

This act of handicapped woman is recorded in history and is a great inspiration for those who want to win. This is a lesson for those who, despite their failure, show how many excuses, blame the circumstances. Success proved to be the slave of courageous, courageous and determined people, proved by Wilma Rudolph. Salutations to W. Rudolph.

Sudha Chandran: An example of determination

After losing a leg in an accident, no woman can even imagine thinking about dancing in life, but Sudha Chandran, on the strength of her indomitable confidence, determination, turned unthinkable into reality. After losing one leg in the accident, Sudha Chandran started her dance practice by putting foot and people were amazed to see her great dance in the film ‘Nache Mayuri’.

Today Sudha Chandran is counted as a very brilliant and successful dancer, TV and film actress. Sudha Chandran says that when Helen Keylor can come out of disability, why don’t I? They believe that success happens in one’s thinking. We can get what we want, but it requires strong confidence.

Courage doesn’t depend on Hands: Stubbornness changes the world

If insisted on positive thinking, the world can indeed change. 15-year-old Roshan Nagar, a resident of Sri Ram Colony Sanganeri, has shown this by doing so. His dream of studies lost after missing both hands and one leg in the accident in the year 2002. The courage of the elders of the house had also given the answer, but Roshan insisted. Today he is appearing for the Class X board examination.

In the year 2002, Roshan walked barefoot while tackling a friend’s kite in the wires of the High-voltage Line passing through the roof of the house. With an iron bar in his hand, he caught it for a kite, so he felt the current that he had to lose one leg and both hands. Dada Narayan brought him home after two operations.

A turning point in his life

About ten months after treatment, Roshan expressed his desire to read. Grandma Kisna Devi encouraged him on this insistence, he got him to practice writing with a pen tied in his hand. After hard work, she started going to school again in the fifth grade in the year 2003. With this dedication, he scored 52% in VI, 62% in VII, 79% in VIII and 64% in IX. See the courage of 15-year-old Roshan Nagar without an arm. Roshan tied the pen on the severed hand and took the tenth examination at the Navata Center in Jaipur. Roshan says – He does not want to be a burden on anyone. He wants to become a CA.