A flame that inspires Millions

Every single thing of ‘Swami Vivekananda: An immense source of inspiration’ fills us with energy. In his short life, he left a deep impression of India and Hindutva on the whole world. His speech delivered in Chicago is popular even today and gives us an idea of ​​Indian rich cultural heritage. We have found some inspiring Swami Vivekananda Quotes that may help you to make your life better.

His childhood name was Narendranath Dutt. Narendranath was born in Calcutta on 12 January 1863. The name “Swami Vivekananda” was given to him by his Guru Ramakrishna Paramahansa. He established the Ramakrishna Mission for the service work of the society. 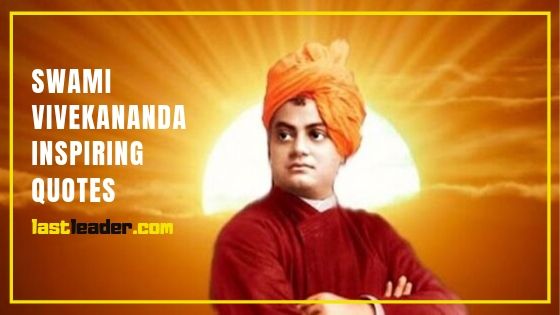 There was a daily ritual in Narendra’s house. Being of the religious instinct, Bhubaneswari Devi (his mother) was very fond of listening to Puranas, Ramayana, Mahabharata, etc. Storytellers used to come to his house every day. Bhajan-kirtan (prayer/song) was also done regularly.

Due to the influence of the religious and spiritual environment of the family, the values ​​of religion and spirituality deepened in the mind of child Narendra. Due to the rites and religious atmosphere of the parents, the child’s desire to know and receive God started appearing in the child’s mind. Sometimes he used to ask such questions in the excitement of knowing about God that his parents and storytellers used to get confused by Swami Ji.

Swami Vivekananda Ji used to spend every single moment of his life in public service and used to inspire everyone to do the same. Here are some inspiring thoughts from him.

Take risks in your life. If you win, then lead. If you lose, you can guide others.

Never say ‘no’. Never say ‘I can’t’ because you are infinite. All power is within you. You can do anything.

Rise, wake up and do not stop until the goal is achieved. ~ SWAMI VIVEKANANDA

Wake up my lion, erase the illusion that you are weak, you are an immortal soul, a free creature, blessed, eternal, you are not a matter, nor a body, matter is your servant, you are not a servant of matter.

All the powers of the universe already belong to us. It is we who put our hands on our eyes and then cry about how dark it is.

Just as the streams generated from different sources, mix their water in the sea, similarly every path chosen by man, whether good or bad goes to God.

Do not condemn anyone. If you can raise your hand to help, then definitely do it. If you cannot do that, then join your hands, bless your brothers, and let them go on their path.

Nothing is impossible for the soul. Thinking like this is the greatest heresy. If there is a sin, it is that; to say that you are weak or others are weak.

If money helps to do good to others, then it has some value for you, otherwise, it is just a pile of evil, and the sooner it gets rid of it, the better.

Truth can be told in a number of ways and each one considered true.

What the world thinks, let them think, be strong in your intention, the world will one day be in your steps.

Service to man is service to God.

Our own mindset makes the world. Thoughts make things good and also make bad. The whole world is in our brain, all we need is light.

This world is like an arena, in which we strengthen ourselves.

The power of the mind is like the rays of the sun, they glow when they are centered.

Whenever I asked God for power, he put me in a difficult situation.

Do not lower your target to the level of abilities. Instead, increase your abilities to the height of your goals.

Strength is life, weakness is death. The extension is life, contraction is death. Love is life, hate is death.

All the power is in you, belief in him. Do not believe that you are weak… Stand up and recognize your inner divinity.

Do not wait for someone else. You should do whatever you can. Do not set your expectations on anyone else.

They live alone who survive for others.

The heart should always be heard in the battle of heart and mind.

In one day, when you don’t come across any problem. Then make sure that you are not going in the wrong direction.

To think of ourselves as weak is the greatest sin.

The best way to know the progress of a nation is the position of women in that society.

Don’t ask anything, don’t ask for anything in return. Give what you have to give, it will come back to you, but don’t think about it now.

This is the world. If you do any favors, people will not give any importance. But as soon as you stop that work, they will not hesitate to immediately prove you crooks. Emotional people are cheated by their loving people.

Check out these after Swami Vivekananda Quotes

Take an idea. Make that idea your life – think about it, dream it, live that idea. Let your brain, muscles, nerves and every part of the body be immersed in that thought, and keep the rest of the thought aside. This is the way to succeed. ~ SWAMI VIVEKANANDA

People laugh at me because I’m different. I laugh at people because they all are the same.

Take an idea and make that idea your life. Think about the same idea, dream the same, live the same.

External nature is another form of inner nature.

The person has become immortal, who is not distracted by anything.

The person who has nothing to learn has died before death.

Hi friends, I hope you liked these Swami Vivekananda Quotes. Comment if you are impressed by Swami Ji. Share with friends and spread positivity.