Every person has observation skill but we don’t know the power of observation. It increases your awareness and makes you smart. It also enhances your analytical performances and improves your personal relations.

Observation is a very important life skill. Every successful person has a great observation power. 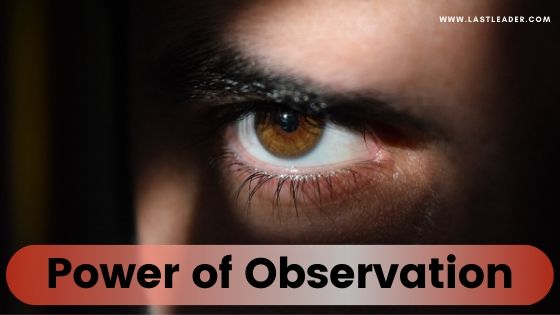 A professor’s idea to focus on the power of observation

Louis Agassiz came into the room and placed a jar full of water in front. A fish was swimming in the jar. The student said that this is sunfish. Louis says I know. Your job is to write as much as you can about the specimen without hurting it. See me when the work is done, I will question you.

This morning, this postgraduate student was thinking that under the supervision of the world’s best-known biologists and geologists, there was an opportunity to do research. And now they made me sit watching the fish. All these professors are probably eccentric.

Well, the student had to finish the work. The student then wrote for an hour. When he felt that the work was done, he went to find the professor. Then it turned out that the professor has disappeared somewhere. The professor did not meet even after waiting the next day. When two days passed, the student understood the game of Professor.

The student again started observing the fish with a calm mind. And after observing for 6 days and 100 hours, small details which were not seen before now started to be revealed. Such as the hidden teeth of the fish, the size of each tooth being different, the symmetry at the top and bottom of the body.

He returned to the observation with full enthusiasm. The work started afresh by throwing away all the old notes. The next 7 days and 70-80 hours. He kept writing new observations and was amazed himself. How that bizarre mystery was revealed before his eyes. Such as changing the color of fish skins slightly at night, some special stripes on the skins which connected it to different species, turning the eyes of the fish in the anti-clock direction when the temperature changes.

Seeing observation notes Louis said – now you are ready. Everyone should know the art of observation.

Louis used to do this with all such students. Somebody used to lock them in a room alone with a lizard, someone with a turtle. Neither used to teach any book nor anything else. And you would get a chance to come out only if you have learned everything about that specimen yourself.

Friends, the funny thing is that it used to take time but every student used to get proficiency in this art.

Why is the power of observation important?

Swami Vivekananda says – Education is the manifestation of perfection present in man. The power or skill of man is hidden. Education is its highlight.

The purpose of a professional degree or education is that your vision should be subtle, and the focus becomes deeper. For example, a good civil engineer can see from a distance that the height of this building is there, the foundation of the building has not become crooked. Because he has learned 4 years – observing design and construction and together he has learned engineering vocabulary or language so that he can think and communicate deeply about that subject.

The art of observation does not only develop with a professional degree, but it is learned every day. And more importantly than that, this art comes in handy every day.

Observing Power of a Champion weightlifter

For example, a champion weightlifter says my performance was a big average of 5 years before I started weight lifting. I used to think that I do not know of any good workout routine. That is why I am not able to lift much weight.

Many people were doing such things around me, I was also waiting for 5 years for any formula. There were long discussions about the new exercise in the daily gym.

But one day suddenly it became understood that everyone else would keep waiting for the perfect routine. I started focusing on small things myself and started observing diet and gym routine, and found that my body responds better by setting more. This means I can lift more weight.

I felt that more work could be done on the variations of deadlifts and squats. As soon as I focused all my attention on my routine, I started seeing the scope of hidden improvement and small victories as well. All this was happening before my eyes for five years but there was never any discipline to pay attention to them. When I started learning from observation, within a few months I started lifting weights at the next level.

So the next question is,

How do we increase our power of observation?

The first thing to remember is that we are not seeing good or bad in any object or person. Judgment and observation cannot coexist. We are only inspecting so that our vision can be subtle and we can observe small nuances.

A professor takes students to sound walking. Students there, in a new place, close their eyes and listen to all the voices and write about them through the eyes of the artist. What effects are being generated by those voices on that attention – this will not only give them a new perspective, but these students will be able to experience everywhere in a new way.

I would suggest you to start observing what you are learning like an artist.

If you want to be a good writer, then read the articles of good writers repeatedly until you get into his mind. In the same way, I want to master communication skills, so I like to see some specific speeches and interviews again and again, how the difficult thing can be easily answered.

The one who gets to learn from this observation, no one else can learn it.

I hope you liked our article on the power of observation. Share with friends so they can benefit from it. We wish you great success. Thanks for reading.